My initial "big idea" about music was the Superstimulus Hypothesis, that music is a super-stimulus for some aspect of speech perception.

This theory drove much of my original investigation, and resulted in the development of many specific hypotheses about specific aspects of music.

I wrote a whole book about it.

Yet, I no longer believe that hypothesis to be the correct answer, and it is effectively replaced by the hypothesis outlined above, that music is a signal which induces an altered state of mind, where, possibly among other things, the emotional response to daydreams is intensified.

But, in the course of attempting to fully develop the Superstimulus Hypothesis, I discovered and developed many associated ideas and hypotheses about music, some of which I consider remain relevant. 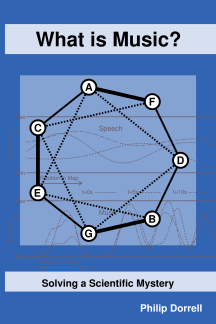 (The following is the original un-edited blurb for the book.)

What is Music?: Solving a Scientific Mystery is a book by Philip Dorrell which explains a new scientific theory about music: the super-stimulus theory.

The main idea of the theory is that music is a super-stimulus for the perception of musicality, where "musicality" is actually a perceived property of speech. "Musicality" refers to the property of music that determines how "good" it is, how strong an emotional effect it has, and how much we enjoy listening to it.

The theory implies that ordinary speech also has this property, in a manner which may vary as a person speaks. The musicality of speech is much more subtle than that of music, but it provides important information which the listener's brain processes (without conscious awareness of the processing), in order to derive some information about the internal mental state of the speaker. This information is applied to modulate the listener's emotional response to speech, and this accounts for the emotional effect of music.

What distinguishes the super-stimulus theory from all other serious attempts to explain music scientifically is that it starts from a simple assumption that music perception must be an information processing function, and this assumption results in quite specific explanations of how major aspects of music such as scales, regular beat and harmony are processed in the brain. It is the first theory to explain the perception of musical scales without a priori assuming the existence of musical scales. (The theory has to do this, because it is a theory of music perception as an aspect of speech perception, and musical scales do not occur in normal speech.)

The chapters of the book can be downloaded as PDF files from here.